Anarchist*in she
no machos, no only white supremacy, no patriarchy !
Too sick for the streets, but riots in my head!

Anarchist individualism as we understand it – and I say we because a substantial handful of friends think this like me – is hostile to every school and every party, every churchly and dogmatic moral, as well as every more or less academic imbecility. Every form of discipline, rule and pedantry is repulsive to the sincere nobility of our vagabond and rebellious restlessness!

Individualism is, for us, creative force, immortal youth, exalting beauty, redemptive and fruitful war. It is the marvelous apotheosis of the flesh and the tragic epic of the spirit. Our logic is that of not having any. Our ideal is the categorical negation of all other ideals for the greatest and supreme triumph of the actual, real, instinctive, reckless and merry life! For us perfection is not a dream, an ideal, a riddle, a mystery, a sphinx, but a vigorous and powerful, luminous and throbbing reality. All human beings are perfect in themselves. All they lack is the heroic courage of their perfection. Since the time that human beings first believed that life was a duty, a calling, a mission, it has meant shame for their power of being, and in following phantoms, they have denied themselves and distanced themselves from the real. When Christ said to human beings: “be yourselves, perfection is in you!” he launched a superb phrase that is the supreme synthesis of life.

It is useless that the bigots, theologians and philosophers do their utmost with deceitful and dialectical sophisms to give a false interpretation to Christ’s words. But when Christ speaks this way to human beings, he disavows his entire calling to renunciation, to a mission and to faith, and all the rest of his doctrine collapses miserably in the mud, knocked down by he himself. And here, and here alone, is Christ’s great tragedy. Let human beings open their misty eyes in the blinding sun of this truth, and they will find themselves face to face with their true and laughing redemption.

This is the ethical part individualism, neither romantically mystical, nor idealistically monastic, neither moral, nor immoral, but amoral, wild, furious and warlike, that keeps its luminous roots voluptuously rooted in the phosphorescent perianth of pagan nature, and its verdant foliage resting on the purple mouth of virgin life.

To every form of human Society that would try to impose renunciations and artificial sorrow on our anarchic and rebellious I, thirsting for free and exulting expansion, we will respond with a roaring and sacrilegious howl of dynamite.

To all those demagogues of politics and of philosophy that carry in their pockets a beautiful system made by mortgaging a corner of the future, we respond with Bakunin: Oafs and weaklings! Every duty that they would like to impose on us we will furiously trample under our sacrilegious feet. Every shady phantom that they would place before our eyes, greedy for light, we will angrily rip up with our daringly profaning hands. Christ was ashamed of his own doctrine and he broke it first. Friedrich Nietzsche was afraid of his overhuman and made it die in the midst of his agonizing animals, asking pity of the higher man. But we are neither afraid nor ashamed of the liberated Human Being.

We exalt Prometheus, the sacrilegious thief who stole the eternal spark from Jove’s heaven to animate the man of clay, and we glorify Hercules, the powerful, liberating hero.

Pagan nature has placed a Prometheus in the mind of every mortal human being, and a Hercules in the brain of every thinker. But morality, that disgusting enchantress of philosophers, peoples and humanity, has glorified and sanctified the vulture exalting it as divine justice, and divine justice, which Comte humanized, has condemned the Hero.

The Human Being of furrow and the thinker have trembled before this baleful phantom and courage has remained defeated under the enormous weight of fear.

But anarchist individualism is a brilliant and fatal torch that casts light into the darkness into the realm of fear and puts to flight the phantoms of Divine justice that Comte humanized.

Individualism is the free and unconstrained song that reconnects the individual to the eternal and universal pan-dynamism, that is neither moral nor immoral, but that is everything. Nature; and Life! What is Life? Depths and peaks, instinct and reason, light and darkness, mud and beauty, joy and sorrow. Disavowal of the past, domination of the present, longing and yearning for the future.

Life is all this. And all this is also individualism. Who seeks to escape Life? Who dares to deny it?

The Social Revolution is the sudden awakening of Prometheus after a fall into a faint of sorrow caused by the foul vulture that rips his heart to shreds. It is an attempt at self-liberation. But the chains with which the sinister god Jove had him chained on the Caucasus by the repugnant servant Vulcan cannot be broken except by the Titanic rebel Hero, son of Jove himself.

We rebel children of this putrid humanity that has chained human beings in the dogmatic mud of social superstitions will never miss bringing our tremendous axe blow down on the rusty links of this hateful chain.

Yes, we anarchist individualists are for Social Revolution, but in our way, it’s understood!

The revolt of the individual against society is not given by that of the masses against governments. Even when the masses submit to governments, living in the sacred and shameful peace of their resignation, the anarchist individual lives against society because he is in a never-ending and irreconcilable war with it, but when, at a historical turning point, he comes together with the masses in revolt, he raises his black flag with them and throws his dynamite with them.

The anarchist individualist is in the Social Revolution, not as a demagogue, but as a inciting element, not as an apostle, but as a living, effective, destructive force...

All past revolutions were in the end, bourgeois and conservative. That which flashes on the red horizon of our magnificently tragic time will have for its aim the fierce socialist humanism. We, anarchist individualists, will enter into the revolution for an exclusive need of our own to set fire to and incite spirits. To make sure that, as Stirner says, it is not a new revolution that approaches, but rather an immense, proud, reckless, shameless, conscienceless crime that rumbles with the lightning on the horizon, and beneath which the sky, swollen with foreboding, grows dark and silent. And Ibsen: “There’s only one revolution I recognize – that was truly, thoroughly radical – ... I’m referring to the ancient Flood! That one alone was truly serious. But even then the devil lost his due: you know Noah took up the dictatorship. Let’s make this revolution again, but more thoroughly. It requires real men as well as orators. So you bring on the roaring waters, I’ll supply the powder keg to blow up the ark.”

Now since dictatorship will be – alas! – inevitable in the somber global revolution that sends its bleak glow from the east over our black cowardice, the ultimate task of we anarchist individualists will be that of blowing up the final ark with bomb explosions and the final dictator with Browning shots. The new society established, we will return to its margins to live our lives dangerously as noble criminals and audacious sinners! Because the anarchist individualist still means eternal renewal, in the field of art, thought and action.

Anarchist individualism still means eternal revolt against eternal sorrow, the eternal search for new springs of life, joy and beauty. And we will still be such in Anarchy.

- written under the name of Mario Ferrento 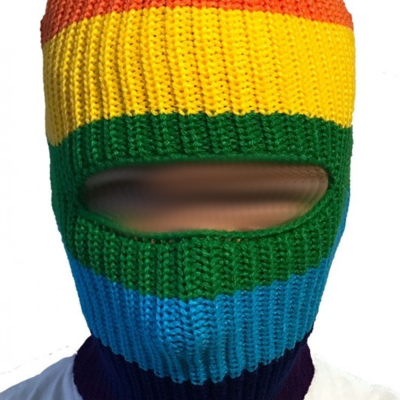 Anarchist*in she
no machos, no only white supremacy, no patriarchy !
Too sick for the streets, but riots in my head!